Recent Entries
The Island
Mozart
Mixed Berries
TV and Half-Life 2
What are they thinking?
My Big Fat Obnoxious Boss and more
Fun at work!
Fun while driving

Well, I figured out what they were tonight watching the news. They were doing a feature about one of thier reporters who was chosen for a scene in the upcoming movie The Island. Yeah...I haven't heard about it either, but its due out in June 2005 acording to the news report. While watching the teaser for it, I recognized the police cars that were on the trailer with the cool car. Then they showed a quick action scene, and I saw the car had the number 34 on it. Go look above the cool car at the number on the trunk. While its no huge secret, its still pretty cool :P

Today, instead of having my usual PopTarts for breakfast, I brought a granola bar to work with me that was called Mixed Berry. It was one of the Nature Valley Trail Mix flavors, and while it was tasty, I wouldn't go so far as to call it "Mixed" Berry. Looking closer at the wrapper, I read this, it was actually raspberry, strawberry, and blueberry flavored. You would think that this would mean that it would have these types of berries in it. Did it? No, it has "Natural Raspberry and Strawberry Flavored Fruit Pieces" These are actually Sugar, Dried Cranberries, Citric Acid, Natural Flavor, Elderberry Juice Concentrate, Sunflower Oil. Okay, so that leaves blueberries....or does it? Once again, its full of tasty Blueberry flavored Fruit Pieces made from Sugar, Dried Cranberries, Blueberry Juice Concentrate, Citric Acid, Natural Flavor, Sunflower Oil. At least the blueberry pieces had blueberry flavoring in them.

Why wasn't Cranberry listed as the type of berry? I think its because to many people don't like cranberries, but when you sugar them up, and change their flavor they'll eat them. They could have at least given the poor cranberry some credit, but it like the unfortunate elderberry doesn't make many people cry out for joy. (Has anyone actually had an elderberry? I don't even know what they look like, but I assume they are similar to a blackberry).

I bought Half-Life 2 today, but haven't gotten to play it yet :( Right now, its finally installing while I watch the show House, MD on Fox. Its a new medical show, produced by the producer of X-Men and The Usual Suspects. The previews made it look very good. I'll update this when its over.

So far, all 5 discs of HL2 are done, and House MD is still good. The main character, Dr. House, has a philosophy that is strange for a doctor. He tries to take the patient out of the equation. His philosophy is people lie, so don't even talk with them.

HL2 is now waiting for steam to connect, that is going slowly. It finally connected, but it was "too busy" to register my game. However, they're nice and are going to let me play it anyway..../boggle. Now it just has to finish installing/decrypting itself.

"You mean we're just suppose to watch her die?"
"Yes"

(the above is based on a patient they can't diagnose. How fast she's dying would determine what she probably has)

"House doesn't believe in pretense. He just says what he thinks."

There were many more good ones. Watch it next week if you can, its on Tuesday night at 9:00.

Also, has anyone else seen the Old Navy TV ad about thier sweaters? I swear one of them says she's wearing a Feral Turtleneck, but that doesn't even make sense since turtlenecks aren't exactly untamed animals :)

What are they thinking?

There are some very strange products out there. The stranges thing I've seen lately are these disposable tooth brush like things that slip over your finger. They're made by Oral B. The purpose of them is to let you brush your teeth any time, any where. I guess they're suppose to be pocket sized so you don't need a toothbrush and tooth paste. You're still brushing your teeth with your finger! Honestly, if you're that concerned with brushing after every time you eat something....use a real brush. I'm sure its not very good at getting between teeth where you're going to have the most residue stuck.

Next...MythBusters. On the Discovery Channel there's a show called MythBusters which tries out various urban ledgends/other interesting myths/questions to see if they are actually true. When I first saw the show I thought it was great, but after I've watched more and more episodes, they really do a horrible job with some of the things they are trying to prove. A few of the shows are really good at providing information. The one tonight however was extra dumb.

They were trying to see what would achieve better gas mileage: driving with your windows down or AC running full blast on on a hot day. To do their test, they had two SUVs!! Okay, first of all, if you're concerned about gas mileage, maybe you should try something that gets over 12 mpg. Secondly, having the windows down will create more drag that's for sure, but a Ford Explorer isn't the most aerodynamic thing in the world. They tested it two ways, first they did 5 laps around a track with the windows up, 5 with them down, 5 with the AC running. This test showed that there was no difference between the AC running or not, and a .3-.4 decrease with the windows down. The second test is to have two explorers drive till they run out of gas. (They use 5 gallons of gas, but they have to pump the tanks empty, then fill them up, so...there's no way they have the same amount of gas in them). They found that the SUV with the windows down lasted 30 more laps(15 miles) than the one with the AC running at 45 mph.

A better test would be 2 high mpg cars. (No hybrids, since they don't get super gas mileage unless you're in stop and go trafic). This would give you something that is much more aero dynamic, and give you more range in your mpg rating to change.

Having Cable finally is great, but I can tell now its going to kill my free time for a while :) Tonight I watched one of the newest reality shows on fox, My Big Fat Obnoxious Boss. The premise of the show is there are 12 very sought after men and women competeing for the right for a job with Iocor, a made up 3.8 billion dollar company. What the contestants don't know is that the company is a fraud. The trick is the "owner" of Iocor is actual an actor. There is another "real boss" who will decide who stays and who goes, but he's not been revealed yet. He'll be introduced "later" in the show. So I'm now stuck in the reality show watching fever.

There's another one on Tuesday that has the head of Virgin giving the winner of the show his job. I'll probably end up watching that as well.

Today I accepted the counter offer on a Condo I found and liked. Now once I close on my house in Indiana, I'll have a place up here in Detroit. Its rather strange to think that I'm already on my 2nd house and job less than 2 years after graduating.

So far the new job has been mostly boring, as there's not a lot for me to do right now. I suppose that's better than hating the people you're working for. Today I got to do something great! I got to get in the M1A2 tank, and watch some testing being done on it. I was in the loader's position, which I think would be a crappy job. There was surprisingly less room in there than I had thought. They even did some testing with the engine running, and I want a turbine for my car :P

I was on my way back to Detroit on Sunday, just south of Toledo when I passed 2 car carriers with a rather strange load. The first one I passed had 5 or so grey, unbadged Chrysler Pacifica's (I think), and one police car. The second one was full of police cars + one what I thought from far away was a Prowler. After getting closer, I realized that it wasn't a Prowler, but it was a very cool looking car. Since I had my digital camera, I pulled off at the rest stop which was just a few miles ahead, and waited for them to pass me.

I took these 2 pictures (yeah, they kind of suck, but people were getting mad at me for going 55 in the passing lane:P) Anyone have any idea what this car is? (Click the pictures for the full size versions ~2Mb) 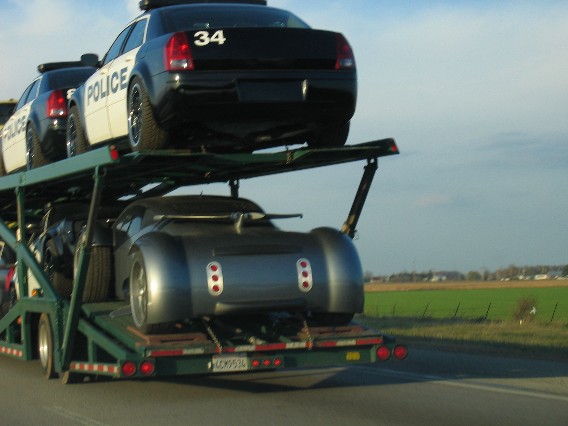 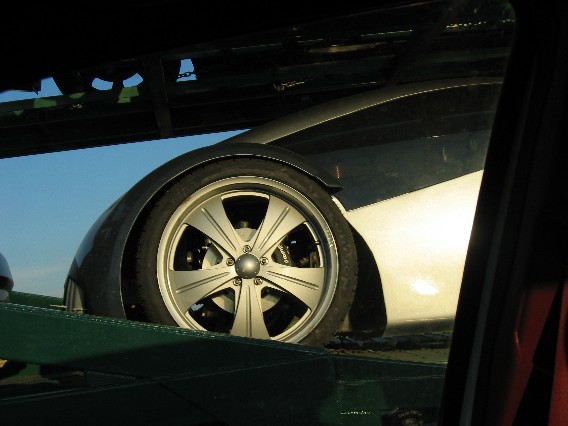