Since everyone else was....I couldn't decide which name to use though, have 3 :P

Personality cocktail
From Go-Quiz.com
Posted by Cynan at 03:22 PM | Comments (3)

Here are some pictures of my puppy, she finally has a name as well, Keira, which means Dark/Black in Gaelic. 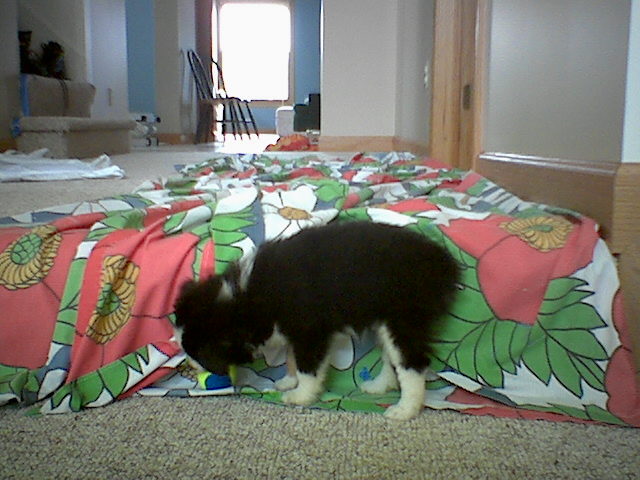 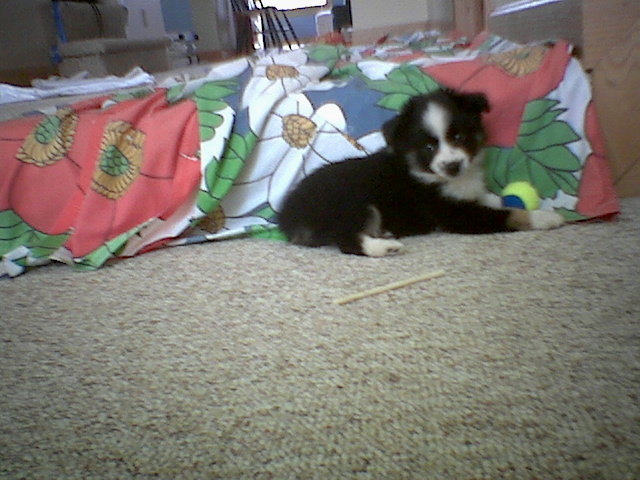 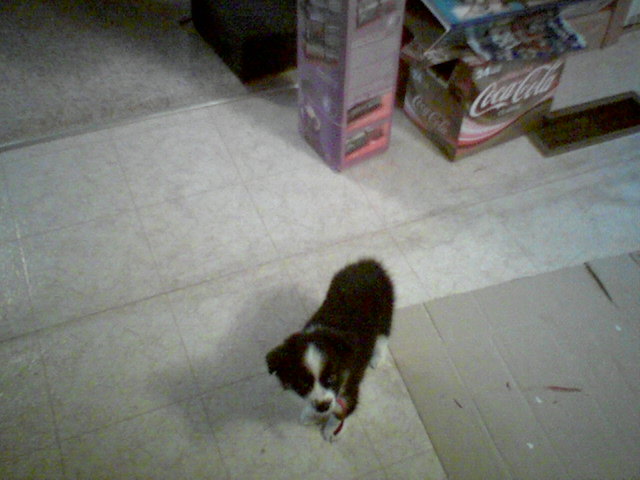 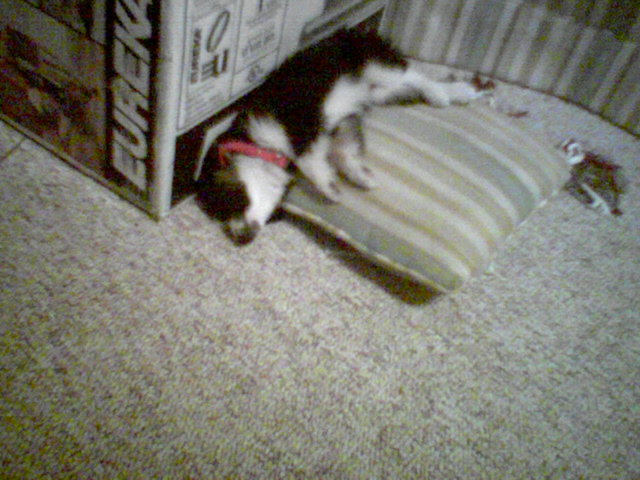 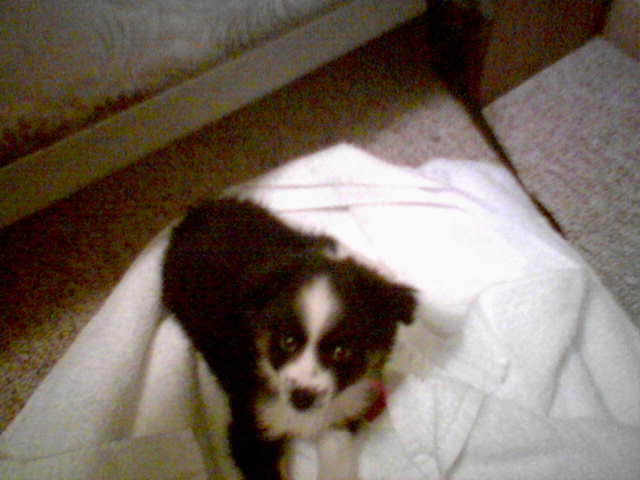 Amazon's "Gold Box" feature is really weird... I have no idea how it picks what to stick in there, or if its the same for everybody, but I tend to get 2 types of things in my box....Jewelry, and powertool combo packs/single power tools costing over $500. I've never bought jewelry from Amazon, nor have I purchased powertools from them. 6-8 of the Items are always one of those two things though. I suppose its because when you buy yourself the powertools, you'll need to suck up with some jewelry later or something.

I've got 2 computers at work, my desktop, and a laptop. I leave both running 24/7. Most the time, if I haven't been using my laptop, the top is closed and it just sits on my desk. Lately, I've been using it for development, and I've been leaving the screen up. Then 2-3 nights ago, it would mysteriously be closed when I came to work in the morning. I just sort of guessed maybe the cleaners had shut it, but didn't care too much.

Today, I open it up and see a notepad window with the following in it:

"you know, leaving this laptop on all night will shorten the life of the screen. Please shut this laptop down at night.

Now to this I say, nice BS. You see, I have had a laptop in college. I left it on 24 hours a day, 7 days a week (unless I had to drag it to class). I never let it shut off the screen for 3 years (until I loaded XP on it), since doing so would lock up the thing, and make me restart it. The screen still works.

My degree is in Computer Engineering. I think I know what will damage the "screen" in a laptop. Excesive heat, harsh abrasive cleaners, lots of water, Beer, Cola, darts, and golf clubs to name a few. (And no, Golf clubs don't get you a free replacement laptop at Rose-Hulman. They get you mocked, and then you have to shell out the money to fix it.) Leaving the monitor on won't shorten the life of the screen in a noticeable way. *Maybe* the backlighting will dim, but most likely nothing will happen. There are far more likely things that will fail before the screen goes bad.

Why don't they leave me a note telling me that leaving it plugged in all the time is bad for the batteries, and if I don't actually use the batteries they will loose their ability to hold a charge?

Also, what the hell is with leaving me a note on the screen, and then not even claiming who it was from other than IS Dept. Why not just email me and ask me why I was leaving it on? Maybe it was how they had it set up when they gave it to me. Maybe I didn't care enough to check to see if the power savings turns of the monitor when connected to a power outlet. Maybe if the damn thing didn't lock up all the time when the screen saver was left on......

Day trips to Detroit suck, but they do give me lots of hours which I suppose is nice. Also, Ford is much better at feeding people than GM. At GM we got cold sandwiches, chips, fruit, cookies, and drinks, all brought to us by ARA (or Aramark). They are the same people that ran our cafeteria in college. They still stuck, but the cookies aren't too bad.

At Ford, they had an awsome spread for lunch. Rolls, Mashed potatoes (with lumps, and skin, they were good), Some sort of chicken + !rice(its the stuff that looks like rice, but is much smaller), baked fish, sauteed Veggies(which were perfect). Great cookies, and cherry cobbler (not quite so good).

Also, this last weekend, I bought a puppy! I got a miniature Australian shepherd. Which looks like this(none of them are mine, I haven't gotten pictures put up yet. She is similar in color to the third down on the left side.

So far, she's learned to go up+down steps, and to ring some bells I hung on the door when she wants to go outside. Unfortuneatly, now that she knows that ringing the bells means she gets to go out, she does it like every 45 minutes. I'm building a run for her today, so I can leave her outside with out me being there to make sure she doesn't wander off.

Also, she doesn't like sleeping alone right now, which is a pain. Each night she's stayed in her room longer and longer with out whining so much that I can't sleep, but so far I've had to let her sleep on my bed, just so I could sleep. I don't really like teaching her to sleep in bed with me, so hopefully she gets better about being alone at night or at learns to sleep on the floor in my room. During the day I'm guessing she whines too, but I'm not there trying to sleep!

I'll try to some real pictures of her taken tonight.

In order to save my company money on insurance costs, we're being forced ^H^H^H^H^H^Hencouraged to participate in a "wellness" program. By participating, we get to pay less insurance rates. Really, ours just won't go up as much as someone who doesn't participate in the program. Since I want to save money, but don't really want to do the wellness thing, I signed up for it. But I'm going to make it hard on them. Oh, by the way, the person doing the health screening doesn't even have to be a RN. They only have to have a 4 year "health" degree.....

The first form i got to in my packet was a consent form. It had the following line which I crossed out. "I understand that M____y will not release the results of any test or screening to my employer, but may disclose what services I received if necessary to obtain payment." Sorry, but no, you may not tell my employer what tests I take, even to get money out of me. You can tell them I owe you money, but not what for. The next part I changed was this line, " M____y may provide statistical information to my employer that does not contain any health information that is individually identifiable." I added a NOT between may and provide. Sorry, I'm only doing this to save me money.

Now comes the fun bubble sheet. However, I can tell right away this will be a pain to fill out. Instead of the usual circles, its got rectangles. They are the size of 2 circles. Why can't they use the circles, they're so much easier to fill in. Here are some of my favorite questions. Remember, this form is to screen MY health.

Has your spouse or child been diagnosed with any of the following?
---Okay, the child part I can understand, with them being half of you. But spouse? What does that have to do with my health?

Is your spouse pregnant?
---See above. Mental health maybe, but this isn't to see if I'm crazy. You don't need a form to see that!

Do you perform testicular self exams on a monthly basis?
--This one is fun on many levels... I scratch them at least once a day, does that count? I answered no, just so I can say to them if they ask that I scratch my balls every day.

On average, how often do you wear you safety belt?

In general, how close to the speed limit do you drive?

Someone tell me what these have to do with my "health". Sure they increase the risk of me dying and costing the company life insurance, but they don't have squat to do with my health. Maybe I just make bad choices! I guess the idea is if you don't care for your safety, you're more likely to cut of a limb or something. I'm leaving these blank.

Physical Activity
Okay, at least this section is relevant, but why do you make me fill in none for every thing I don't do. I'm not coloring in every one of your stupid rectangles. If I don't do it, I'm leaving it blank. Fill them in yourself.

General Nutrition
This section doesn't surprise me, but some of the questions it asks are phrased stupidly. Take this one: On average, do you drink caffeinated beverages (coffee/tea/soft drinks) more than three times a day? Now, how does the barrel of soda you can get at any fast food joint fit in? If I drink it all at once, it only counts as one time through out the day. Guess its a good thing I drink that, instead of 3 cups of tea so I can answer no to that question.

So we've finally got everything moved to my new house, and now I just have to decide where to put everything. However, there's not paint on any of the walls/ceilings. This is good and bad. I don't have to deal with what someone else thought looked good, which is a plus. On the down side, I need to paint everything. I'd much rather do it now, while I have no real furniture.

This brings another problem. Having no furniture means I have nothing I need to match color wise. Having only primer on the walls means I can't buy furniture to match what's already painted. So where do I start? ARGH!

I could just paint everything white, but that's rather boring. I'd like some color in the place, but since I have no starting place, that means I'll just have to pick out something I like. I'm to indecisive to do that.

Oh well. I'll get everything figured out soon.